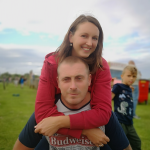 When pregnant with my first daughter friends and family and joked and teased about the sleepless nights to come, I didn’t mind, I was just excited to be starting my family!

In the beginning it was fine, she was this tiny 6lb bundle of gorgeousness, and when she woke in the night id change her, feed her and cuddle her back to sleep, staring in awe at the cuteness we’d created and loving the precious time we spent just us 2 in the middle of the night……………………………………………. Now if your pregnant or still in the really newborn stage I’m sorry to tell your but unfortunately it doesn’t continue like this.

I’d created a child that had to be rocked to sleep, most of the time to myself signing ‘twinkle, twinkle’ which became very embarrassing when out and about, I had to rock her in my arms whenever she woke through the night, which was a squeeze in our loft bedroom, and she had to be FULLY asleep when I dared to put her down, and as she got bigger and bigger, it got harder and harder and I became more and more tired.

Even daytime naps, when she was getting too big for me to want to hold and rock for 20-30 minutes until she was asleep I used to put her in what I called my ‘indoor pram’ (there’s a lot fancier things available now) but I still used to stand there, rocking the pram until she slept.

There were times day and night that I would be rocking her to sleep with tears streaming down my face in pure exhaustion, I remember placing her back in her cot one night, she cried, I knew she would as I knew she wasn’t fully asleep, but I just needed to step into another room and scream!!!!!

When she was 9 months old I found out I was pregnant with my second daughter, totally unplanned and unexpected! The thought of having 2 babies that didn’t sleep terrified me, I knew I had to do something, so I did, I did research, read books, spoke to other mums, tried and tested some ideas. Luckily I got there, I was able to help my daughter learn how to settle herself and sleep right through the night from around 8pm – 6am and with the knowledge I had, my second daughter, and son born 5 years later never had issues with sleeping through, they were both off nighttime feeds around 8 weeks old and able to settle themselves through the night from a young age.

After my own success I’ve shared my tips with many of my families over the years who have mostly reported success, so here I’m going to share with your and hope they help!

My first tip to help your child sleep though the night is to keep the day time sleeps, the above phrase is true. So many parents first instinct when having sleep issues at night is to ban daytime naps, don’t do it!! Preventing daytime naps only creates a stressed out over tired child that is harder to settle on an evening, they need their daytime sleep to keep them in a calmer state all round which helps with nighttime sleep…………banning naps after say 4pm is fine but please don’t ban all daytime sleeping!!

Babies and toddlers sleep in cycles just like adults, a newborns cycle is just under an hour, a toddlers is around an hour and a quarter, a cycle consists of a period of deep dreamy sleep, followed by a lighter sleep then a brief period of waking before starting a new cycle……….the problem of sleep issues normally occurs when parents over react to the brief waking period, the child needs to learn, hopefully from a young age, how to pass through this phase themselves and settle themselves back to sleep!

So starting at the beginning, your can’t get a baby to sleep through the night if they still require a night feed. So what I found worked with my children when I was ready for them st start sleeping through was this:

After settling them down and putting them to bed around 7-7.30pm, I then used to prepare another bottle for when I was ready for bed (unfortunately I didn’t manage to breast feed for long with any of my babies but that’s a whole other story).

Before going to bed myself, without fully waking my child I then gave them this feed, normally around 10.30-11pm, whenever I was tired, I referred to this as ‘a top up feed’

Then I would go to sleep for as long as the top up feed allowed, for the first night or so the baby would wake shortly after the time they previously had their night feed, the trick then is to make the night feeds smaller and smaller.

The baby can get enough milk from their top up feed that a night feed is no longer necessary, by gradually making the night feeds smaller and smaller, they begin to realize it’s not worth waking for and your can do away with it all together. Eventually allowing your a sleep from say 11pm – 5.30/6am, with a baby under one, this is what I would class as a good nights sleep!

Once your babies over a year old your should be able to do away with the top up feed, use the same method, just gradually lessen it until it’s not missed.

Firstly let me point out this isn’t my method, I didn’t invent it, it’s just something I came across and found to work.

So once your child no longer needs a nighttime feed there is really no need for them to be waking though the night……………but like I explained above, they will wake during the night as they have sleep cycles just like us, the key now is to react to this waking as little as possible and to teach your child how to settle themselves.

Not all children are the same so ill talk your through how it worked with my eldest daughter who I talked about above who was already very aware that if she screamed during the night she would have all mummys attention whilst been rocked to sleep………..as opposed my son who came along 5years later to a mummy that knew what she was doing, a mummy that was working full time 2 weeks after his birth and really needed her sleep!!!

If your child is already in the habit of waking though the night for some attention, it’s going to be harder, just a warning! Brace yourself for a tough few nights, it might take a week or 2 and your need to be prepared for that so your can pull it off properly, then it’s sooo worth it in the long run. Here’s what your do

-Child cries, give them 5 minutes, if they are still crying see to them like your always have in the past, after a few minutes of cuddling, rocking, patting or shh hing when they begin to settle come away. They don’t need to be fully asleep.

-They are shocked you’ve come away, your normally wait till they are fully asleep, they cry again, this time your leave them a little longer, 7 minutes, then go back in and comfort again, avoid eye contact if possible, as soon as they begin to settle, come away.

-your continue in this way, leaving them for an extra 2 mins each time, then going in to comfort, each time your go in to comfort offer less and less of a comfort.

Eventually they realised the period of crying is not worth it and begin to learn how to settle themselves.

So this is what I followed, I never left her more than 15 minutes and ill be truthful, the first couple of nights leaving her to cry for just the 5 minutes nearly drove me insane, it beaks your heart to listen to your child crying and not run in to help them, but in the long run your are doing them a favor, it took around a week, and they are the longest nights of your life, but it works.

Start young, as soon as night feeds are gone there is no need for the waking so stop it before it starts, this will be the easiest ride, they don’t have a habit to break yet.

Know your child, if your child is sick, frightened or teething, that’s different, they need their parent, it’s not the right time to use this method.

If possible try it in the daytime first, whenever your child has their normal nap, try putting them down half awake and letting them settle themselves……………. I found it much easier to zone out the crying (5,7,9,11,13,& 15 minutes) during the day while I could busy myself than during the evening or night.

Be prepared, if your under the weather or have a lot going on during the day then it might not be the right time for your, it’s tough!

This is what worked for me, it has also worked for many of the children I have cared for over the years, I hope it helps some of your and I would love to hear of any success stories or other top tips.

One thought on “How to get your child sleeping through the night………..”

Wed Aug 14 , 2019
As a childcarer you don’t have to provide meals, you can ask parents to send packed lunches. Personally I like to know I’m giving […]